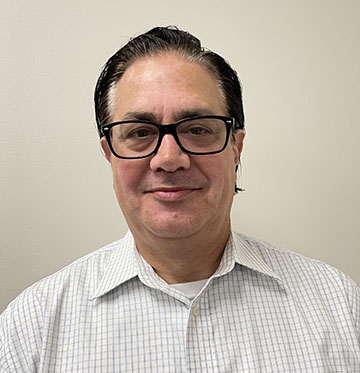 Please give a warm welcome to the newest member of our sales team – Ivo Marsak! Ivo comes to Trans-Border with over 20 years of industry experience.

Ivo attended Niagara University where he earned a degree in Theatre and English. Then he picked up his bags and moved out to L.A. in order to work in television. He started at Stephen Cannell Productions in post-production where he was doing sound effects and sound editing. He also spent some time working for Warner Brothers Television Studios. Tasked with going to customs at the airport he would pick up the dailies coming in from Canada and deliver them back to the studio. “I’ve essentially been in freight my whole life,” states Ivo.

After leaving television Ivo began his career in the logistics industry. He started off working for the integrated carrier, Emery Worldwide Logistics for several years. After he joined BAX Global which dealt with air and ocean freight for 5 years and then stayed on when it was acquired by DB Schenker. Ivo spent another 13 years with DB Schenker before transitioning to Kuehne + Nagel International AG where he represented Upstate and Western NY. Ivo is most excited to be able to “finally deliver hands on experience” to his upstate clients, who were previously often overlooked. One of Ivo’s main priorities is making sure his clients are cared for and given good communication which, he can already tell aligns with Trans-Border’s priorities as well.

Ivo is passionate about traveling and would “travel anywhere and all the time” if he could. His “secret passion” is art, especially art history. Simply stated he enjoys anything that “stands the test of time.” And he has seen plenty of things that would qualify throughout his travels, including a battleship from the War of 1812. Ivo, who is a certified IDC Staff Instructor with PADI: Professional Association of Diving Instructors, has been all over the world to dive. He has been diving in some of the most iconic places such as the deadly blue hole in Egypt and Belize, however, his favorite place to dive is the Saint Lawrence River. This is where the ship from the early 1800s rests, kept well preserved due to the cold, freshwater.

As a self-proclaimed perfectionist, he is determined to find the best method for all his undertakings. So, whether it’s diving into the deep or driving out to meet clients, Ivo is always exploring new ways to improve!

We are very excited to have Ivo at Trans-Border! Stop by Ivo’s desk when he is in the office or drop him a welcome message at imarsak@tbgfs.com.