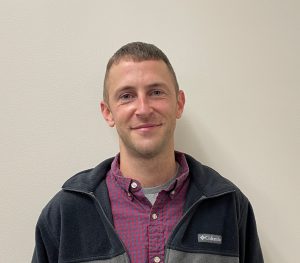 Everyone please give a warm welcome to the newest member of the Trans-Border team – Kevin Lee! Kevin has a background in management and logistics.

Kevin grew up in Clifton Park and has stayed local most of his life. He has a beautiful family comprised of his partner and their two children, ages 1 and 4. His family is his inspiration, and he works hard to be an example to them on how to have a good work ethic and the benefits that are bound to follow.

Kevin has previously held several management positions including a car rental company within the airport, a fishing rod company as a buyer & planner as well as their logistics specialist, and most recently at Target as an operational manager. He is very excited to learn and grow in his knowledge of logistics here at Trans-Border. Kevin states that he has a “working knowledge” of the logistics industry but would like to become an expert. The best part for him so far has been the people. He really enjoys the domestic team and states, in the sincerest way, “there are some funny people out there on the floor!”

Kevin is an avid fisherman, doesn’t matter if it is water or ice! He enjoys fishing on rivers, ponds, lakes and has big plans to utilize our proximity to Round Lake often. He won’t be fishing in the ocean anytime soon as he has noted that one of his phobias is the dark ocean, meaning both the ocean at night and the deep ocean. He “doesn’t want any part of it.” With just 5% of the ocean having been explored, Kevin might be on to something here!

If he could learn a new skill in 10 minutes, he would love to have crazy good mathematical skills. His favorite music genre is rock and his favorite place that he has travelled to is Cancun. If he had a yacht, he would name it Shmav – which was his nickname in college where he played college football. His motto in life is the famous Matthew McConaughey catchphrase, “Alright, Alright, Alright.”

We are very happy to have Kevin at Trans-Border! Stop by Kevin’s desk or drop him a welcome message at klee@tbgfs.com.